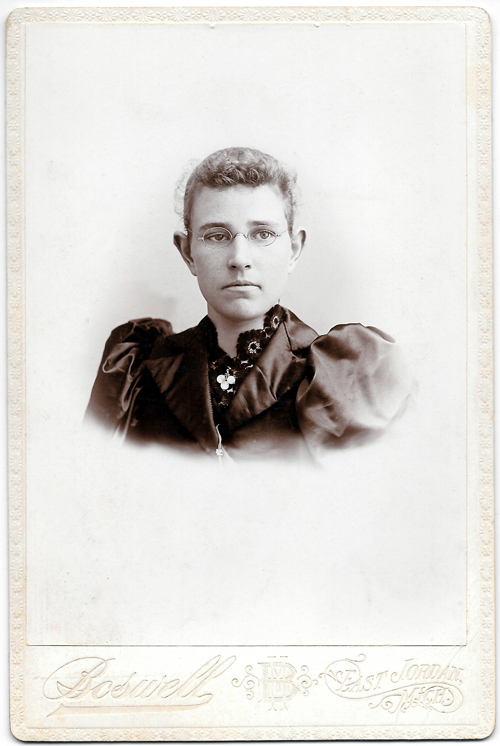 Here is another cabinet card from the Pinney album, which I found in an antique shop in Fremont, Indiana.  This image was not identified, but upon researching the family some years ago, I was pretty certain I knew the name of the sitter, based on the fact that she was the only female cousin found living in East Jordan, Michigan who fit the time period.  Recently, I discovered photos shared on a public ancestry tree and now I can be certain that I’ve matched this photo with the correct person.

Laura Mabel Pinney’s family moved from Arcade, New York and were one of the early settlers of Jordan Township in Antrim County, Michigan.  In 1873, when she was about one year old, and her brothers, Herman and Howard were six and four, her father, Curtis, purchased a 160-acre parcel of woodland that he cleared and where he built a 16 x 24 ft. log cabin.  Her Grandmother Pinney, a widow, lived with the family.  Her mother, Marion (nee Beebe), knit long woolen socks and mittens, sewed rag rugs and clothing for the family. And when a schoolhouse was built, her mother acted as a teacher for the first year.

When Laura was fifteen, her parents built a nicer frame house on the homestead that was completely finished and even had running water, courtesy of a nearby spring piping water into a 20-gallon tank in the pantry.  What a joy that must have been!

Laura worked as a live-in housekeeper during her early adult years, later becoming a dressmaker.  I wonder if she designed and made the dress she is wearing in this photo?

Laura and her brother, Howard Curtis Pinney, came down with pneumonia in 1911 and both succumbed to the illness within a couple weeks of each other.  She was just 38 years old.

Sources
Census records
A Brief Account of the Pioneer Settlement of a part of Antrim County, by Allison Pinney
Michigan death records