This cabinet card has so much going for it!  From the lovely studio backdrop to the girl’s big-eyed, faraway stare,  to the awkward pose made to show off her dress bustle (and wow, what a bustle!)  Bustles reached extreme proportions in the mid-1880s. 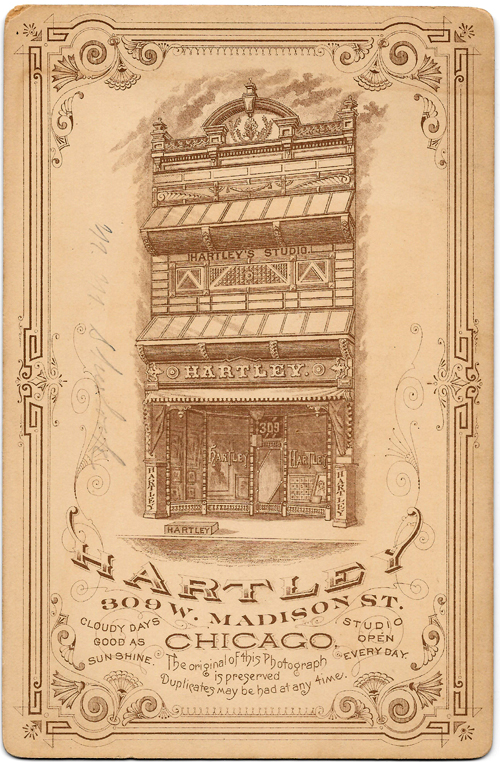 The back of the card is just as interesting.  The artwork offers a glimpse into the sitter’s view when she approached Hartley’s Studio at 309 W. Madison St. in Chicago, Illinois. And what a clever motto, “Cloudy Days Good as Sunshine.”

The sitter is Martha Miriam Sherlock.  Martha was born in 1860 in Illinois.  She was a teacher in the 1880s, married George Herzberg when she was 33, had children and died in Texas, aged 84.  I can’t say Martha led an uninteresting life, but I can say that I didn’t find anything as interesting as what I discovered when researching Hartley’s Studio. Let’s turn our attention to the photographer, Charles F. Hartley.

Hartley’s Studio was established about 1876 by Edward F. Hartley, who came to Chicago from Jacksonville, Illinois when he was 28 years old.  Upon Edward’s sudden death in 1887, his wife inherited the studio, and his fellow photographer and younger brother, Charles F. Hartley, took over management until 1894.

And, oh what a year Charles had in 1894!  On January 28, he broke away from his late brother’s studio and bought out Brand’s Gallery, upon the retirement of Edwin Brand. This may not have caused quite the uproar if he hadn’t named his new business Hartley’s and attempted to draw customers away from the original Hartley’s Studio, which was still in full operation.

Charles’ advertisements were met with a flurry of dueling ads from the original Hartley’s Studio.  I don’t know about you, but the rooster would have won my business!

As interesting as the Hartley studio feud, Charles soon had it beat.  It seems he was all about “out with the old, in with the new.”  He became infatuated with another man’s wife, and after months of mooning over Mrs. Victor Mudge, Charles left his wife to pursue her.

Being the curious person that I am, I had questions.  What became of the two Hartley’s studios? Did Mrs. Mudge leave Mr. Mudge and live happily ever after with Charles?

Charles returned to Chicago and continued in the photography business until his studio went bankrupt in 1900.  Charles’ half-brother, Arthur, managed the original Hartley’s studio until 1899 when H. E. Kuessner took over ownership.  It closed its doors about 1902.

Belle Gertrude divorced Charles, and he married the woman he couldn’t live without, Mrs. Mudge, in Milwaukee, Wisconsin on September 4, 1895.  After the bankruptcy, Charles moved to New York City where he was an agent for Traveler’s Insurance Company.

And the question I most wanted answered, just who was Mrs. Mudge?  I hate that newspapers often referred to women by their husband’s name only.  It makes it so much harder to find them.   Mrs. Mudge was born Martha Cora Hardy in Salt Lake City, Utah.  In 1881, at the age of 16, she traveled to New York to pursue an operatic singing career and soon was married. Remember the cabinet card sitter’s surname was Sherlock. Imagine my surprise when I found Martha’s first husband was John Moriarity!  Of course, only Sherlock Holmes fans will find this funny.