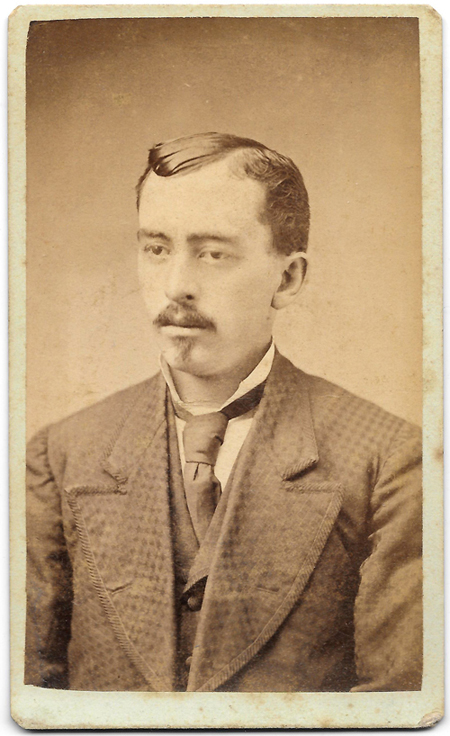 This carte de visite was languishing in a shop in Lansing, Michigan for at least two years.  On my latest visit, I could no longer resist the urge to rescue it.  The sitter looks to be about 20 years old and based on his fashion, I suspect the photo was taken in the late 1870s.  I wonder if the recipient of the image was a family member or a friend. 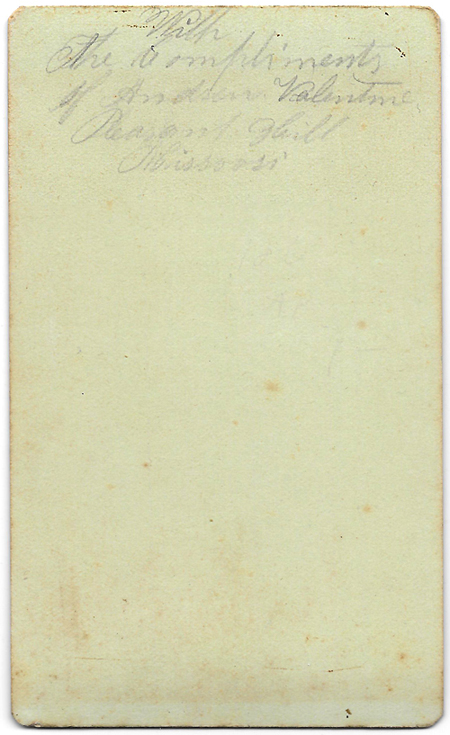 My search for an Andrew Valentine living in Pleasant Hills, Missouri came up empty.  However, I did locate a name and age match living about 124 miles away, in Columbia.  It’s possible that, as a young man wanting to make his own way in the world, Andrew lived for a short time in Pleasant Hills, before moving back to, and settling down in, Columbia.

I found the above photo, of the Andrew Valentine of Columbia, on Ancestry.  I think he’s definitely my cdv sitter.  Look at the ears, the forehead/hairline, and most notably, the one eye that’s slightly off from the other.  What do you think?

Andrew’s headstone gives his year of birth as 1859.  However, Andrew’s father, Erastus Valentine, recorded Andrew’s birth in the family bible as November 2, 1856.  It was also noted, in the bible, that he was named after his father’s brother, Andrew Jackson, who died earlier in 1856.  Andrew’s youngest son, Clyde, attributed the confusion about the year of his father’s birth, to the fact that the children did not believe their father could be that old.  haha!

4 thoughts on “With Compliments”