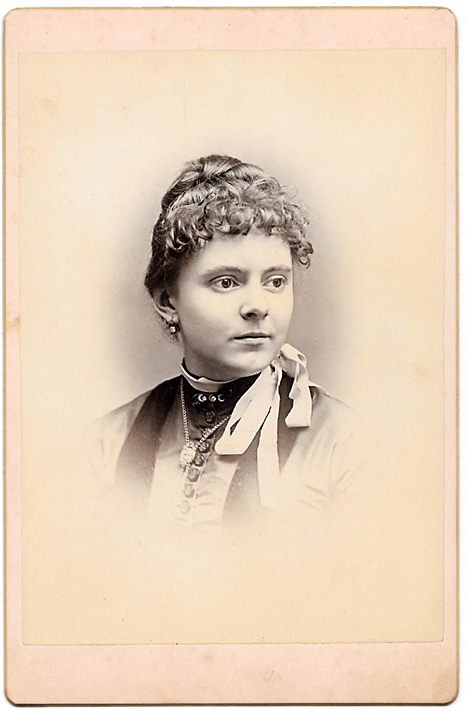 Jessie Calhoun’s cabinet card photo was found in an album that belonged to Jessie Sylvester.  I believe the girls were cousins, as there are shared surnames in their respective family trees.  However, I was unable to find a direct link.

Born in 1867, in Ashtabula county, Ohio, Jessie’s father, Porter Calhoun, was a farmer, and her mother, Carrie (nee Stillman), was a milliner.  It appears that her parents separated when she was a child.  Jessie never married, and from what I can tell, lived with her mother throughout her life.  Both mother and daughter ended up in the Cleveland State Hospital for the Insane, described as a hell for the sick.

Known as the Northern Ohio Lunatic Asylum when it opened in 1855, the hospital was built to provide a homelike place to care for the mentally ill, who at that time were being housed in jails or poor houses.   Although the hospital may have started out as a refuge, by 1874 it was overcrowded, and patient treatment and living conditions only continued to worsen.

Although inhumane treatment and squalid living conditions existed long before 1943, it wasn’t until then that they were so publicly documented.  A group of conscientious objectors of WWII, assigned to work at the hospital by the selective service system, were horrified at what they witnessed.  They kept diaries and shared them with local reporter, Walter Lerch.  The Cleveland Press ran Lerch’s stories, exposing the conditions at the hospital (also known as Newburgh).  Some of the headlines were “Mental Patients Here Beaten and Shackled,” and “Food for Mental Patients Revolting.”

These horrific conditions were Jessie’s reality from 1912, at the age of 45, until her death on February 6, 1940.  Based on her death record, her diagnosis during this time was a paranoid state.  The definition of this condition is “a state marked by delusions of grandeur or persecution which aren’t as systematized and significant as in a delusional disorder or as disorganized and strange as in paranoid schizophrenia.” 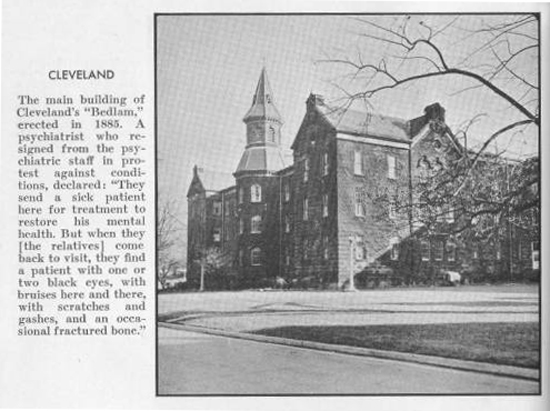 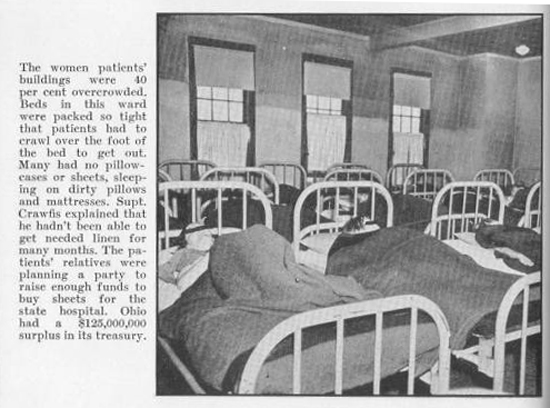 I was unable to find when Jessie’s mother, Carrie, entered the state hospital, or why she became a patient.  But, she died there, of pneumonia, in 1921. 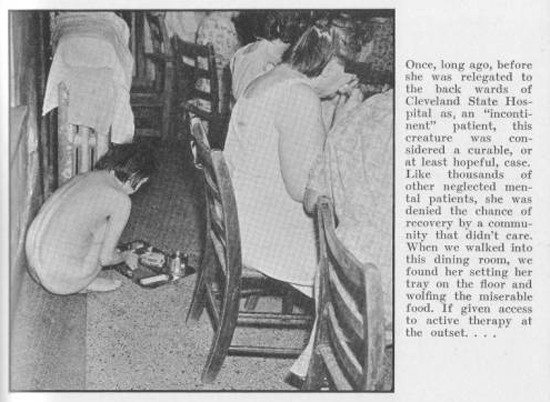 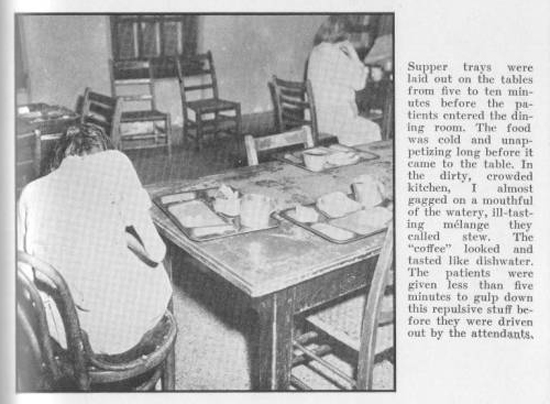 A grand jury investigation was mounted, and in 1945 an indictment (not of a singular person or persons, but of the social system as a whole) was laid out.  In part, it read, “The Grand Jury is shocked beyond words that a so-called civilized society would allow fellow human beings to be mistreated as they are at the Cleveland State Hospital.  No enlightened community dare tolerate the conditions that exist at this institution …
It would be a prison for the well.  It is a hell for the sick…”

I have to wonder if Jessie’s years in the state hospital were because her mental illness was so severe that it couldn’t be cured, or calmed enough for her release, or if hers was a case of having no outside support, and therefore she became trapped in a system with no means of escape.

One thought on “A Hell for the Sick”