This is the second post based on a cabinet card I found in a shop in Allen, Michigan.  The photo was identified as Inez Swartz “Adrian Home girl,” which was a term used for residents of the Adrian Industrial School for Girls. If you’d like to see the complete cabinet card image and read my earlier post, you can do so here.

Girls were sent to live at the Home for Girls for a variety of reasons including running away, homelessness, poor home environment, or any behavior that was considered unbecoming.

There were no girls named Inez living in the Adrian Industrial School when the 1900 census data was collected but there were three Swartz girls; Addie and Ada, 15-year-old twins, and their 17-year-old sister, Lizzie.  I found no record of these girls using the name Inez at any time during their lives so I don’t believe they’re our sitter.

Of course, it’s important that we take into consideration that written identifications are only as good as the person’s memory and knowledge at the time it was penned.  Could someone have identified this photo many years later and been confused about the name?  Absolutely.

While searching newspapers I came across the above articles which not only solved the mystery of how Addie, Ada, and Lizzie ended up in the Home for Girls, but also provided two more possible matches; Lulu and Flossie Swartz.  As if the story wasn’t distressing enough, I’m sure that the reporter’s description of the children “crying as if their little hearts would break” brought a tear to the eye of even the most calloused reader, it definitely did to mine.

Could one of the youngest Swartz children be our sitter?  The ages fit, as I estimate Inez was about thirteen to fifteen years old when her photo was taken sometime in the early 1900s and I knew it was plausible that the names Lulu and Flossie were nicknames. Tracking them down took some time.

It was common practice for the Adrian Home to send girls to live and work on farms in neighboring communities and, at least for Flossie, that ended up being the case.  The grand discovery came by way of a Shiawassee County, Michigan marriage record for a Florence Miller.  Flossie had indeed been a nickname.  It’s a lesson that we should always inspect documents when they are available and not rely on the transcribed previews. 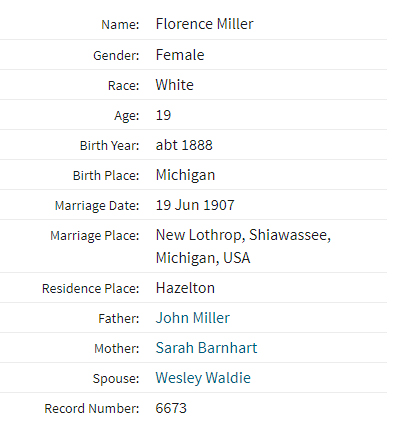 The name Swartz was not transcribed, nor was the notation “by adoption” that you see added below the mother’s name.  Florence had escaped life at the Adrian Home for Girls and was adopted by John and Sarah Miller.  Was her life better for it? I hope so.

Florence died in 1942 and her obituary led me to Lulu whose given name was Louise Elizabeth.  Louise wed Ralph Robinson in 1907, but where was she in 1900 while her older sisters were living at the Adrian Home?  I located a 13-year-old Lizzie Swartz living as a servant with the Reed family in 1900 in Barton Township, Michigan.  Since Louise’s middle name was Elizabeth this might have been her.

With all of the Swartz girls accounted for and no evidence to suggest any of them used the name Inez, should they be ruled out? What if, as I mentioned earlier, the identification on the cabinet card is flawed? Speaking of that, here’s another case to consider:

Our sitter might have been Agnes Schwartz, a 14-year-old in 1904, who I initially thought was the weakest theory as there was no evidence or circumstance (such as a parent’s death) to support Agnes being sent to the Adrian Home for Girls.  Of course that’s a silly reason since all it would have taken is something as simple as sassing her father or skipping school.

I can see how someone might have confused the names Agnes and Inez, as they have a similar ring to them.  There is also the fact that Agnes lived in Algansee, Michigan, which was a mere 18 miles west of Hillsdale where our sitter posed for her photo.  I always had the photographer’s location in the back of my mind, wondering how it played into this mystery.  Inez Yoder and the Swartz sisters all lived 75 to 115 miles from Hillsdale.  Wouldn’t their families have used a studio that was closer to home?

I wondered if the Home for Girls, 35 miles east of Hillsdale, might have taken some of the residents to have their photos taken.  Maybe the photographers made a “house call” to the institution. However, girls living at the Adrian Home wore uniforms of white blouses and skirts, so our sitter’s attire doesn’t fit that hypothesis.

By the age of twenty, Agnes was boarding with a family in Coldwater and working as a Cutter in a shoe factory.  She married Sam Ferree in 1910 and had one son, Clifford.  Agnes died in 1967 and is buried in Battle Creek, Michigan.

Were any of the girls I researched the young woman from our cabinet card?  Out of all of them, I think Inez Yoder is the most probable match. But, I have to say that the answer is more likely that it’s none of them.  Ha!  What do you think?

In a couple days I’ll be making a wrap-up post focusing on the Adrian Home for Girls itself, and what life held in store for some of the other young women who lived there in 1900.  Beware, it’s far from a pretty picture…

9 thoughts on “As If Their Little Hearts Would Break”